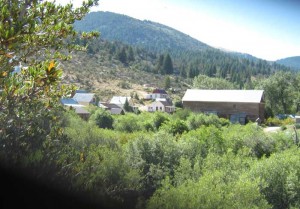 September and October are choice months for visiting Silver City, one of the premier Old West mining towns. Silver City will have an open house September 19 and 20. As area historian Helen Nettleton noted, Silver City “has escaped the pseudo ‘restoration’ which has debased the historic value of so many similar towns. It stands completely natural in its development from boom town to ‘ghost town’ to summer residence for the owners of the buildings still standing.”

Wood buildings from the 1860s and 1870s still exist in town, along with the ruins of two stone buildings dating to the 1860s. Silver City was founded in 1865 to exploit rich silver ore from War Eagle Mountain, which rises on the southeast edge of town. The town’s fortunes fell and rose as mines played out and new mines were dug. Silver City had the first telegraph office in southwest Idaho, a water system, telephones and electric power. By the 1920s mining was in decline and the town relied on income from the county payroll to stay afloat.

That lifeline was cut in 1934 when Owyhee County offices were ordered to be moved to Murphy. Some buildings were torn down for salvage, including the stone courthouse. By the mid-1940s only one resident, Will Hawes, stayed through the long winters to protect the town as best he could from vandals, thieves and the antics of nature.

Silver City offers the visitor plenty to see. The Idaho Hotel serves meals and has rooms for overnight guests (make reservations). The Fire Department thrift store has antiques and gifts. Pat’s What-Not Shop has refreshments, gifts and books, including a useful booklet of interesting buildings. A campground in town has tables and toilets but campers need to bring water. There are restrooms at the BLM Rabbit Creek Off-Road-Vehicle site on Idaho 78 outside Murphy, at Ruby Junction a mile from Silver City, and in town.

Visitors from Boise Valley can expect a Silver City jaunt to take a full day. The turn for Silver City is five miles east of Murphy on Hwy 78. From the highway, it is 20 miles to town. The Silver City road is paved for the first 7 miles, then is dirt with some rock outcroppings protruding. It is steep but all right for passenger cars. The county warns against taking large trucks or large trailers on this road, and it is closed by snow from about November 1 to June 1. After crossing New York Summit, be alert for rough road. Driving from Silver City west to US 95 makes a nice tour along Jordan Creek, but the first couple of miles are rocky. Eight miles from Ruby Junction the road is much improved beginning at the DeLamar Mine. Follow Trout Creek for a good road to Jordan Valley and US 95.