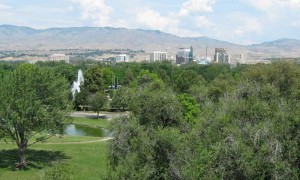 A little glimpse of Boise’s Ann Morrison Park with downtown Boise in the background. Construction of the park began in 1958 and the park was dedicated in 1959. Harry Morrison of the noted engineering and construction firm Morrison-Knudsen directed the conversion of a 130 acre weed-filled site along the south bank of the Boise River to an attractive modern park. The park is dedicated to the memory of Morrison’s wife Ann, who accompanied him to construction sites around the world and dedicated her social aptitude to gaining supporters for the company and its projects.